Cameron Green is no longer knocking on the Test door, he's thumping it, demanding to be let in, but Travis Head emphatically answered the challenge from those wanting his place on Thursday.

Coach and selector Justin Langer last week said the fierce competition for places would leave no room for mediocrity among the incumbents. He would like what he has seen in the opening two rounds of the Sheffield Shield, which have delivered runs galore for those on the fringe of the baggy green. 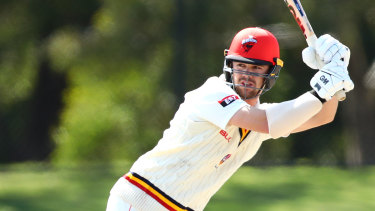 Travis Head made a century for South Australia in the Sheffield Shield.Credit:Getty

Though Langer has said his Test squad is all but settled, Head can nevertheless sleep a lot more comfortably now he has a ton under his belt leading into the series against India.

The left-hander has struggled to convert his half-centuries into big tons, which explains why his first-class average has been below 40 for much of his career, but with challengers emerging for his Test berth the standards required for a place in the side have risen markedly. This was the first time he had batted through a day.

"Trav played an exceptional innings, and it was probably the difference between us getting through and not," Test captain and Tasmania skipper Tim Paine said.

"I thought Trav handled it beautifully, especially the ball spinning into him. He played it very, very well. Good signs from an Australian point of view."

That Green, with four centuries since the start of the last Shield season and an overall average of 52, is not an automatic selection is testament to how high the bar has risen.

Green, 21, has powers of concentration beyond a player of his age and is not easily satisfied. He cut a disconsolate figure on his way off the field after being given out lbw to Sean Abbott for 197. The disappointment, he said, was as much due to his belief he had hit the ball to coming so close to his first double ton.

The cynics will point to the batsman-friendly wicket to downplay his performance, but he still had the determination and skill to face 438 balls against a high-class NSW attack that included Test spinner Nathan Lyon.

"They came pretty hard, I take a lot out of it," Green said.

Green, who is recovering from stress fractures in his back, is building to a return to bowling in either Western Australia's next Shield game or their final match in the Adelaide.