A capacity field has been selected for Saturday's Cox Plate, but Lloyd Williams' galloper Buckhurst has been named the unlucky emergency after the race's committee was forced to squeeze 15 into 14.

The European import last Saturday finished seventh in the Caulfield Cup but Team Williams decided to pay up for the lightly raced five-year-old for Saturday's weight-for-age championship. 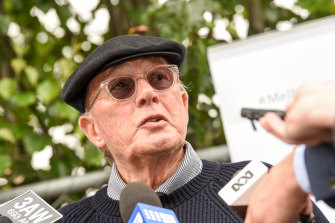 But the committee decided that both Master Of Wine and three-year-old colt Grandslam deserved their spot in the race over Buckhurst, who has not placed in two group 1 attempts.

Makybe Diva Stakes winner Fierce Impact, George Main Stakes winner Kolding and Epsom Handicap winner Probabeel bring winning form to the race, while Grandslam is looking to emulate the feats of Shamus Award by sneaking into the field on the back of a Caulfield Guineas placing.

Metropolitan placegetter Mugatoo shapes as an X-factor, while warhorse Humidor – who has twice placed in a Cox Plate – locked away his spot in the race when he won the Feehan Stakes early last month.

Trainer Grant Williams said he couldn't be happier with Arcadia Queen, who produced her best last start beating Russian Camelot in the Caulfield Stakes. The mare had a spin around The Valley on Tuesday morning over 1200 metres under Willie Pike and worked home strongly over the final 400 metres to the pleasure of Williams.

"She's probably pulled up the best out of her last run," he said.

"Hopefully everything is just starting to work out for her. We're getting to the grand final, so I couldn't be happier with her. I'll get her home and give her a little bit more work on Thursday and then come here and have no excuses."

Epsom winner Probabeel will carry the hopes of New Zealand and look to go two places better than her stablemate Te Akau Shark who ran third in the Cox Plate last year after running second in the Epsom. She had her first look at the track on Tuesday morning and handled it really well, according to Patrick Payne, who is looking after the four-year-old for Jamie Richards, who is still in New Zealand.

Sir Dragonet had his second look at The Valley on Tuesday after working at the track on Saturday. Rider James Winks said the horse had switched on after leaving Werribee.

"On Saturday he had a gallop. It was his first time on the surface and he adapted to it really well," Winks said.

"Again this morning, the main thing is getting around that corner. He's got a beautiful action and he does it, no worries.

"The horse is in good order. By all reports he's eating up. There's a lot of boxes being ticked. Now it's just get him on race day and see what he can do."