Stand up and take a bow. Well, that's effectively what Glen Boss did at the winning post when he raced away with Saturday's VRC Sprint Classic with star Godolphin sprinter Bivouac.

The never-short-on-confidence Boss could not have been more bullish about his Everest runner-up going into Saturday's $1.5 million race and his anticipation was justified after the son of Exceed And Excel smashed his rivals including the world's best sprinter Nature Strip in arrogant fashion.

The demolition job was as clinical as we've seen down the straight since Black Caviar's back-to-back wins in the race in 2010 and 2011, and if there were any knockers on the Godolphin colt, they were quickly silenced after the runaway victory. 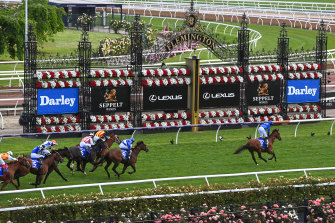 Boss – who avoided a fine for his celebration because he held the reins with both hands – quipped post-race that he knew he was on the winner before he got in the barriers, such was the form Bivouac presented in the yard.

"I'm very privileged to be sitting on this very good colt," Boss said.

"Everyone knows how many good colts I've been associated with in my career and this one is right up there with them, I'll tell you. He's a very special animal.

"You don't see them win a Newmarket and a Darley Classic like that. They're good horses.

"There's a sprinter of the year right beside him and he went straight past it and said, 'See you later boys.'"

Nature Strip set an even tempo for the field, but Bivouac enjoyed a comfortable run in trip before unleashing a devastating finish to win by 3.25 lengths, with Nature Strip second and Libertini third.

The four-year-old beat up on his own age group last season and also claimed the Newmarket Handicap in the autumn as a late three-year-old, but on Saturday he announced himself as a group 1 weight-for-age sprinter.

It's been a fruitful trip to Melbourne for Boss, 51, who now calls Sydney home, adding the Sprint Classic to his Cox Plate victory on Sir Dragonet. 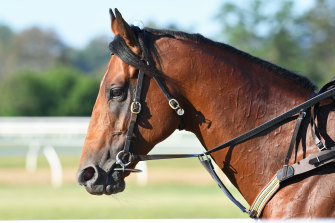 "When I get on these colts, it makes it even better. It's something I love to do.

"I'm getting towards the pointy end of my career, but to be here at Flemington and win a race over the fours day is extraordinary."

"I've ridden some of the best colts in Australia over the last 20 years," he said.

"Even going back through Snitzel and Fastnet Rock, just rattle off 10 of them, they're all at stud and they're the best ones.

"He's got form around Yes Yes Yes, which is arguably one of the best colts I've ever ridden in my life. They've got the form. He's beaten Yes Yes Yes and those types of horses. He's a dominant colt. He's got everything that good colts have.

"When I retire I'll look back at these moments. To think that I got on a colt like this and get the job done, it is so special."

"Before today this horse was a seven-time stakes winner," Keogh said.

"As a three-year-old he was a dual group 1 winner over six and seven furlongs. He was homebred here in Australia, and we're just grateful to His Highness Sheikh Mohammed that we can breed and race and produce horses like this in Australia."

On the runner-up Nature Strip, jockey Hugh Bowman said he was happy with the run.

"I was delighted with him. He was great," Bowman said.