UEFA “strongly opposes” plans for a European Premier League and insists the principles of promotion and relegation are “non-negotiable”.

The governing body has told Sky Sports News it believes a European Super League or variants would “become boring”, after it emerged FIFA had backed new plans involving Manchester United and Liverpool.

In a statement just hours after the revelations on Tuesday, a UEFA spokesman said: “The UEFA president has made it clear on many occasions that UEFA strongly opposes a Super League.

“The principles of solidarity, of promotion, relegation and open leagues are non-negotiable. It is what makes European football work and the Champions League the best sports competition in the world.

“UEFA and the clubs are committed to build on such strength not to destroy it to create a super league of 10, 12, even 24 clubs, which would inevitably become boring.”

Sky News has learned that financiers are assembling a $6 billion (£4.6 billion) funding package to assist the creation of what could become known as the European Premier League. 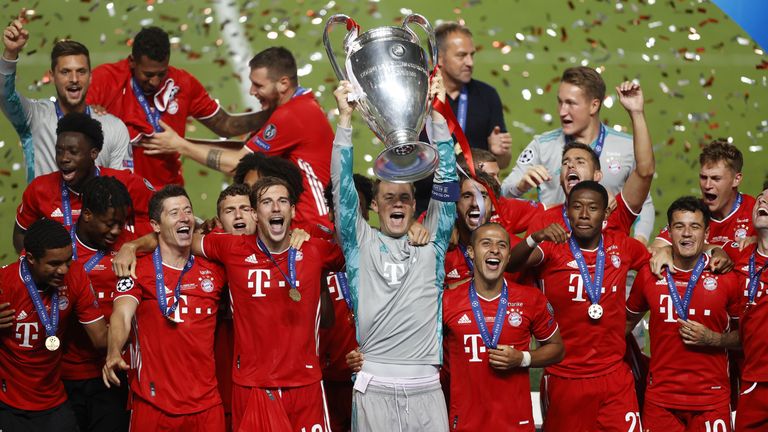 More than a dozen teams from England, France, Germany, Italy and Spain are in negotiations about becoming founder members of the competition.

As many as five English clubs could sign up to join it, with a provisional start date said to have been discussed as early as 2022, and the likes of Arsenal, Chelsea, Manchester City and Tottenham Hotspur all approached, according to insiders.

All clubs involved, as well as FIFA, have declined to comment when contacted by Sky Sports News.

‘Surprise if this becomes reality’

European football’s governing body takes a predictably dim view of any proposals that threaten its flagship club competition, the Champions League, and Aleksander Ceferin has previously warned that any new super league will become “boring”.

FIFA declined to comment on the Sky News report but has pointedly referred to “topics which come up every now and then”. In other words, it cannot deny that the issue has been under discussion but nothing more substantive at this stage. Tellingly, FIFA has not denied it supports these new proposals.

But if this new league is to kick off as early as 2022, in an already-disrupted World Cup year, there would have to be considerable hurdles to overcome.

UEFA has a format, and lucrative TV contracts, in place until 2024 and companies have paid big money for the rights to broadcast games involving Europe’s top clubs.

A ‘European Premier League’ would also have a considerable impact on the value of the Premier League too. What if finishing in the top four no longer matters? What would happen to the compelling drama if European participation was guaranteed to only a select number of clubs, regardless of where they finish?

UEFA controls the Champions League, Europa League, Nations League and European Championship. Would players who compete in this new competition have to give up their right to play in the Euros, for example? It’s possible.

Why would UEFA want to endorse any player which goes against its other competitions? The Football Association, which grants European licences to its clubs, holds the key to almost every domestic issue but it has declined to comment.

It would be a considerable surprise if this becomes a reality, in its current form, but it will generate further debate and focus minds in the corridors of power.

The timing of leaks, as always, is significant and UEFA has yet to decide its Champions League format from 2024. Talk of a £4 billion investment plan, at a time of a global pandemic, with some smaller clubs in crisis, will not sit comfortably with many in the game.