Greg Clarke urged to ‘do the right thing’ and leave his £190,000-a-year role as vice president at FIFA after he resigned as FA chairman following disastrous parliamentary appearance

FIFA have ramped up the pressure on Greg Clarke to step down from his role as vice president.

The 63–year-old resigned from his position as chairman of the Football Association on Tuesday in disgrace following a variety of offensive comments about minority groups.

However, he remains in a £190,000-a-year post on the FIFA Council, after being elected by UEFA last year, and his term of office runs until 2023.

While Clarke is expected to ‘do the right thing’, as one source described it, as of Wednesday night he had not stepped down, with his lack of action prompting a strongly-worded statement from FIFA, which heavily suggested that he should do so.

A FIFA spokesperson said: ‘FIFA’s zero tolerance position on discrimination remains steadfast and clear: any form of discrimination, including racism, sexism and homophobia, has no place in football.

‘In the circumstances and given the nature of his comments, FIFA considers that Mr Clarke did the right thing to resign as Chairman of the FA on Tuesday.

In a strongly-worded statement on Wednesday night, FIFA urged Clarke to ‘do the right thing’ 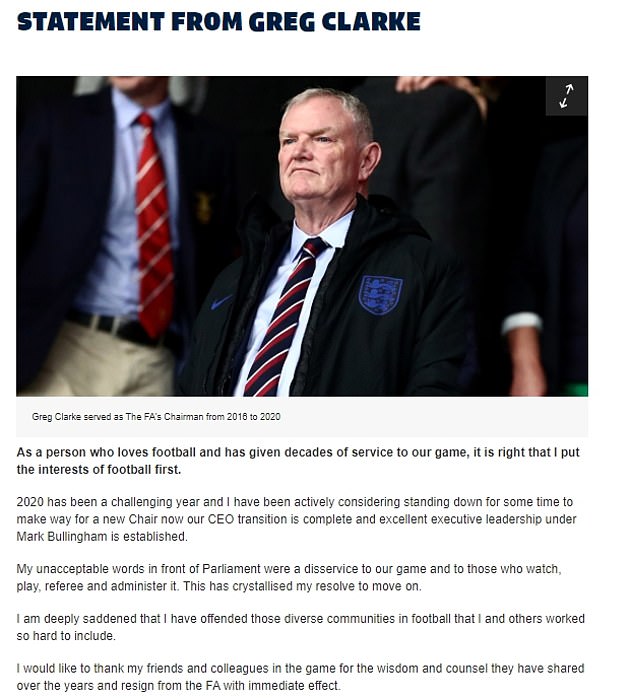 ‘Mr Clarke was elected to his position on the FIFA Council by UEFA and his term of office runs until 2023. He is, of course, free to resign from the FIFA Council, just as he has resigned as Chairman of the FA. It is for Mr Clarke to take that decision.’

Clarke made the comments before MPs at a Department for Digital, Culture, Media and Sport hearing.

He referred to ‘coloured footballers’ and prompted further criticism by claiming that gay players made a ‘life choice’. In what was a surreal, career-ending hour, Clarke also referred to a coach telling him young female players did not like having the ball hit hard at them and said there were ‘a lot more South Asians than there are Afro-Caribbeans’ in the FA’s IT department because ‘they have different career interests’.

Clarke is one of three vice presidents elected by UEFA to sit on FIFA’s decision-making body. Alongside the six-figure salary, the role comes with generous travel expenses.

‘If you go to the IT department at the FA, there’s a lot more South Asians than there are Afro-Caribbeans. They have different career interests.’

‘The real issue is once you run out in front of 60,000 people and you decided on Monday that you wanted to disclose your sexuality – and I would never pressure anybody to disclose their sexuality – what I would want to do is to know that anybody who runs out onto the pitch and says, ‘I’m gay. I’m proud of it and I’m happy. It’s a life choice, and I’ve made it because my life is a better place’, I’d like to believe and I do believe they would have the support of their mates in the changing room.’

‘I talked to a coach – and I’m not certain this is true – and said, ‘what’s the issue with goalkeepers in the women’s game?’ She said, ‘young girls, when they take up the game (aged) six, seven, eight, just don’t like having the ball kicked at them hard’, right? They prefer to kick it than have it kicked at them. We have to understand we need to look at different ways to bring women into the goalkeeper’s position.’