Barcelona have announced contract extensions for four first-team players, including experienced centre-back Gerard Pique whose new deal until June 2024 would extend his stay at the Catalan side to 16 years.

The 33-year-old Spain international, who arrived from Manchester United in 2008, was sent off in Tuesday’s 5-1 Champions League victory over Hungarian side Ferencvaros.

Barca confirmed a buy-out clause of £457m in the contract, and said the extension was “subject to the player making a certain number of appearances from the 2021/22 season”. 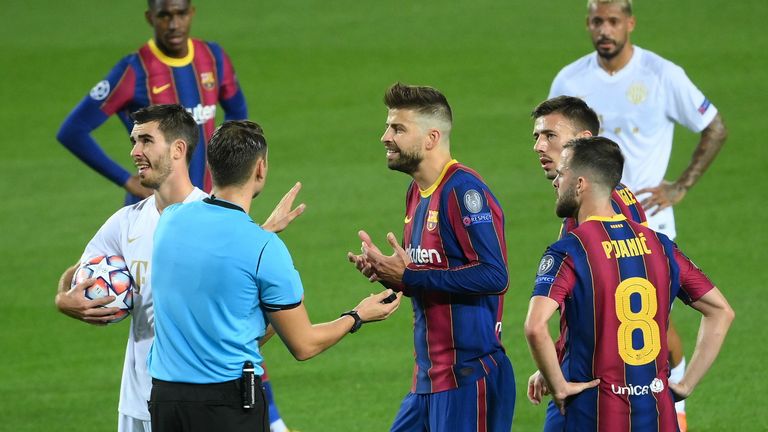 “These agreements have been reached following weeks of negotiations and include a temporary salary adjustment due to the current circumstances brought about by the Covid-19 induced crisis,” Barca said in a statement on Tuesday.

Barcelona sold high-profile names in the summer to lower their wage bill, with Luis Suarez joining Atletico Madrid and Ivan Rakitic returning to Sevilla after six years at the Nou Camp.

Related posts:
Rio Ferdinand identifies the area Marcus Rashford must improve after PSG winner
Man Utd pundits have Axel Tuanzebe theory after star shines in PSG victory
Popular News
NBA releases first half of regular-season schedule
12/04/2020
Dynasty talk on hold for Nankervis and Richmond
10/17/2020
Solskjaer admits the pressure is on as Man United face Newcastle
10/17/2020
Nimes 0-4 PSG: Kylian Mbappe scores twice as French champions move top
10/17/2020
How Ole Gunnar Solskjaer could shake up Man United for Newcastle trip
10/17/2020
Recent News
NBA releases first half of regular-season schedule
12/04/2020
Alexander-Arnold boost and full-blooded Robertson – Inside Liverpool training
12/04/2020
Kai Havertz reveals Chelsea ace messaged him 'every day' to convince him to join
12/04/2020
Man Utd boss Ole Gunnar Solskjaer still ‘doesn’t trust’ double-act after PSG defeat
12/04/2020
Losing Len Kasper to the Sox might be hardest blow for Cubs fans
12/04/2020
This website uses cookies to improve your user experience and to provide you with advertisements that are relevant to your interests. By continuing to browse the site you are agreeing to our use of cookies.Ok