Should Richmond win the premiership, Trent Cotchin will be the first captain in club history to be skipper for three premierships, an achievement that wasn’t managed by club immortals Jack Dyer and Royce Hart.

It’s a potential record that Cotchin, who says he lives very much in the moment, did not know about. ‘‘No, I didn’t. It’s something I’ll probably reflect on at the end.’’

Cotchin is into his third grand final, aiming for a 3-0 record that would make him the envy of various others who have struck out in grand finals. This one will be at the Gabba, for the first and probably only time in AFL history – to which he offers this salient perspective on Richmond’s progress: ‘‘To be honest with you, three or four years ago, I never thought I’d play in a grand final. 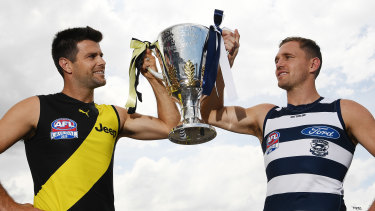 To the winner the spoils: Trent Cotchin and Joel Selwood.Credit:Getty Images

‘‘As I said, it’s special no matter where it is, we’re just really looking forward to the opportunity.’’

Cotchin has had a challenging year, on both a personal and team front, but it is a year that is concluding in another premiership opportunity. His team has had some issues – notably the Sydney Stack and Callum Coleman-Jones drama in Surfers’ Paradise, which Cotchin said offered a learning experience for the club.

‘‘I think when you’re always challenged as a group, and clearly there was a lot of people talking about what had happened with that situation, it was a public challenge that we faced,’’ Cotchin said of the kebab-shop incident that resulted in the pair being suspended and sent home.

‘‘What it does is encourage lots of great conversations that allow people to share how they feel.

‘‘As we’ve always said, our No.1 focus is to ensure that those two players receive the support and help that is required.’’

As captain, Cotchin seeks to balance pushing standards for the players with empathy.

‘‘I think you definitely have to have standards and values but I always try to treat every scenario with empathy,’’ he said.

Cotchin also had his own difficulties, when his wife Brooke’s sojourn to a beauty parlour resulted in the club copping a $25,000 fine for a COVID breach in Queensland as part of the draconian AFL rules for those in club hubs.

Cotchin, at first reluctant to discuss a situation that involved his wife, observed that it was not part of Brooke’s job to be in the spotlight like a footballer.

‘‘Yeah, it’s a challenge. It’s not her job to be put out in the public spotlight like we are as players.
‘‘So that was challenging but you know again we learned a lot through that with regards to our relationship but also the people who are always there for you.’’ 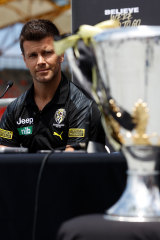 Cotchin agreed that the hubs were not a natural environment – ‘‘no, definitely not’’ – but says it was also a treasured experience that he and his family will not forget.

‘‘It’s certainly something that I think we’ll reflect on for years to come … you know, having the kids around and for the boys and Brooke, for that matter, just to get to experience what I get to experience every day back in Melbourne has been special and unique and has given them a total appreciation of, you know, what footy clubs are about, particularly our footy club.

‘‘Just some of the life lessons that they’ve learned just from spending time with guys, whether it’s out on the pitch out here or playing card games and so forth.

‘‘They’re all experiences that they probably wouldn’t have got, certainly not the age of six, four and one.

‘‘Yeah, we’re incredibly grateful for being part of this journey with them.’’

AFL chief executive Gillon McLachlan spoke with Cotchin a couple of times, just to encourage him, as with other captains, to do all that he could to keep the season going.

Did Cotchin think the season, about to be completed, would actually cross the finish line, as it will on Saturday night at the Gabba.

‘‘To be honest, I had no idea. Once we got up here it seemed as though things were going pretty well but there was definitely times where I think the AFL was fearful.’’

Richmond’s aggression in games has been another discussion point this season, but Cotchin did not view it as an issue.

‘‘No, I think aggression’s a part of our make-up, just with the way, you know, we like to pressure the ball.’’

He felt his own hard-edged play, which has been evident for some years, was ‘‘just part and parcel’’ of playing footy.

‘‘I think we let ourselves down a little bit in the first final, just with regards to the 50 metres.’’
While the Tigers have been seen as the benchmark and even cast as the overdogs, compared to 2017’s insurgency and romance, Cotchin says they remain a team that hunts.

‘‘I think the way we play footy is very much about the hunting. I think that’s a core part of what we do as a team. ‘‘You know, we try to remain hungry and do our best every week.’’