Brisbane Lions veteran Stefan Martin's future is up in the air with the ruckman yet to be offered a new deal by his club.

Martin, who turns 34 next month, is now out-of-contract, with sources close to the situation confirming he wants to stay with the Lions in 2021 for what would be his 14th AFL season. 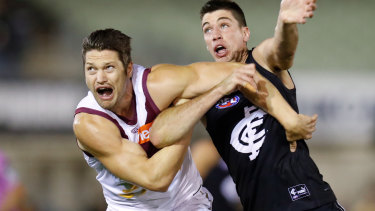 However Brisbane, grappling with the uncertainty surrounding list sizes and total player payments for 2021, have not yet indicated they will offer Martin a new deal.

The former Melbourne big man – a co-winner of the Lions' best and fairest in 2015 – was selected for Victoria for the state of origin match in February but has endured a turbulent season since. He suffered a PCL injury in round one, but didn't miss a match with that ailment because of the season hiatus.

However he then sustained a stress fracture in his back in round seven, only returning for the final round of the season. He played both of Brisbane's finals and but was quiet in rotating through ruck/forward responsibilities with Oscar McInerney during the Lions’ preliminary final loss to Geelong at the Gabba on Saturday night.

Up until this season, Martin had been very durable for the Lions, playing 20 or more matches five seasons in a row.

The bulk of Brisbane's list is contracted for 2021, making the situation even more difficult for their list management team as the AFL and AFL Players’ Association continue to negotiate over proposed list size and TPP changes.

Backup ruckman Archie Smith is contracted for 2021 while the Lions have been impressed by the development of emerging ruckman and former NBL basketballer Tom Fullarton who made his debut earlier this season.

Martin's fellow veteran Grant Birchall had been on the cusp of triggering a new deal for 2021 however his future is also somewhat uncertain following a hamstring injury suffered late in the game against the Cats.

Brisbane are set to land free agent Joe Daniher from Essendon on a long-term deal, and have also been circling injury-ravaged Geelong speedster Nakia Cockatoo who may have played his last game for the Cats.

Whether the Lions envisage Daniher spending time in the ruck next year is unclear however it is conceivable McInerney could take on the No. 1 ruck mantle with Daniher pinch-hitting, leaving Martin either as a depth player or on the outer.

Lions coach Chris Fagan was philosophical when summing up his team's season following the loss to Geelong.

"We've had a fantastic year and it hasn't finished in the way that we wanted to but that's what happens when you get down to the last four," Fagan said.

"The next year they got beaten in the grand final. And then they won three in a row."