After coming to the count feeling flat, 24 hours after his side’s season ended at the hands of Geelong, champion Brisbane Lions rover Lachie Neale started to relax as the Brownlow Medal got under way.

By the end of it, with the medal hanging around his neck, he was able to compartmentalise, while still viewing his individual success as part of a greater whole and a bigger, still evolving story. 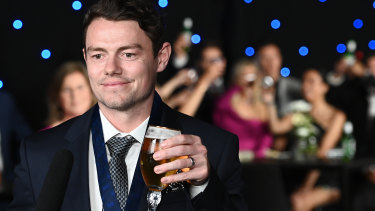 “I’ve been able to take it in and enjoy it,” he said. “It’s two separate things, and with this medal, it’s a medal for the club as well. Four years ago, clubs would have loved playing against the Brisbane Lions.

Neale knew he was the raging favourite, but had been able to sideline the count ahead of Saturday night’s game. I think last year [when he polled equal third] I learned from that experience that I can’t control what’s going to happen tonight.”

But as he shot out to an almost unassailable lead, polling the maximum three votes in six of the first nine games, he knew he was a chance. By round 12, he was on 25 and all but untouchable.

That game was against North Melbourne, a match in which he hadn’t expected to poll. “That’s when I thought, I might be a big chance here.”

Neale hoped to return to his boyhood home base in South Australia’s south east during the off season, where he played junior footy in the tiny community of Kybybolite. After being drafted to Fremantle in 2011, he has missed seeing his younger brother and sisters grow up.

He said was aware of the impact of Covid on grassroots footy. “I can only talk for Kyby and my local town, but they had to combine the leagues this year, so there was only about eight to 10 teams from around the south-east, there’s usually about four leagues.

“So a lot of clubs didn’t play senior footy this year … I feel for those kids and communities that have missed out on a year of footy, because I know how much it would have killed me not to play.”

As a child, Neale said, it was footy or bust. “It was just something that I wanted so badly that I almost willed it to happen, in a way. That was my dream, and I’m very fortunate that that’s come to life.

“I don’t consider what I do work, I love training, I love playing, and I love the environment of a footy club. It’s the best workplace you could have, I would have thought.”

Asked what it meant to him to win the award, Neale showed his only hint of discomfort. “I’m so humbled, it’s an incredible award, it’s something ever since I was a kid I’ve looked up to. My dad, I think, can reel off the last 40 Brownlow medallists.

“I think people remember Brownlow medallists and what they achieve. For me to be in that category now doesn’t really sit well with me, because I just admire so many players that have won them. They’re greats of the game.”

Now, whether he feels he belongs or not, he has joined them.